So i wanted to spend my easter vacation in Barcelona but I ended up getting arrested by the German Police after arriving in Frankfurt on my way to Barcelona. I was charged with trying to illegally enter Germany!

The thing is that on my Schengen it says "Schengen States (-DE, EE, PT). I knew I cannot enter Germany, and was not intending to. All the papers i have orive that I was heading to Barcelona: flights, hotel booking, Areobus tickets... they told me in their report they'll mentione that it was not on purpose, and kept the documents as evidence.

I've traveled before ti europe, several times, and to USA. I've had several connecting flights and never went to Passport Control, but it seems in Frankfurt you will pass through passport control in all cases.

Note that the German Police said they have no idea why it says "-DE", they said there's nothing on their systems concerning me and they blamed Spanish Embassy since they should have saw that my flights are via Frankfurt. When I applied for the visa theh got my tickets and saw the itinerary. Also Luthansa should have not let me board the plane in Beirut.

The German police were great and very respectful. Also they told me I can still use my visa to go to Spain but not through Germany. When i finally got my passport, which is when I landed in Beirut, the passport was stamped but with the letter "C" near it. Not sure how this will affect my future EU travels. It's my dream to go all over europe, and I've been to Greece, Italy and France so far.

Thanks for the feedback guys. 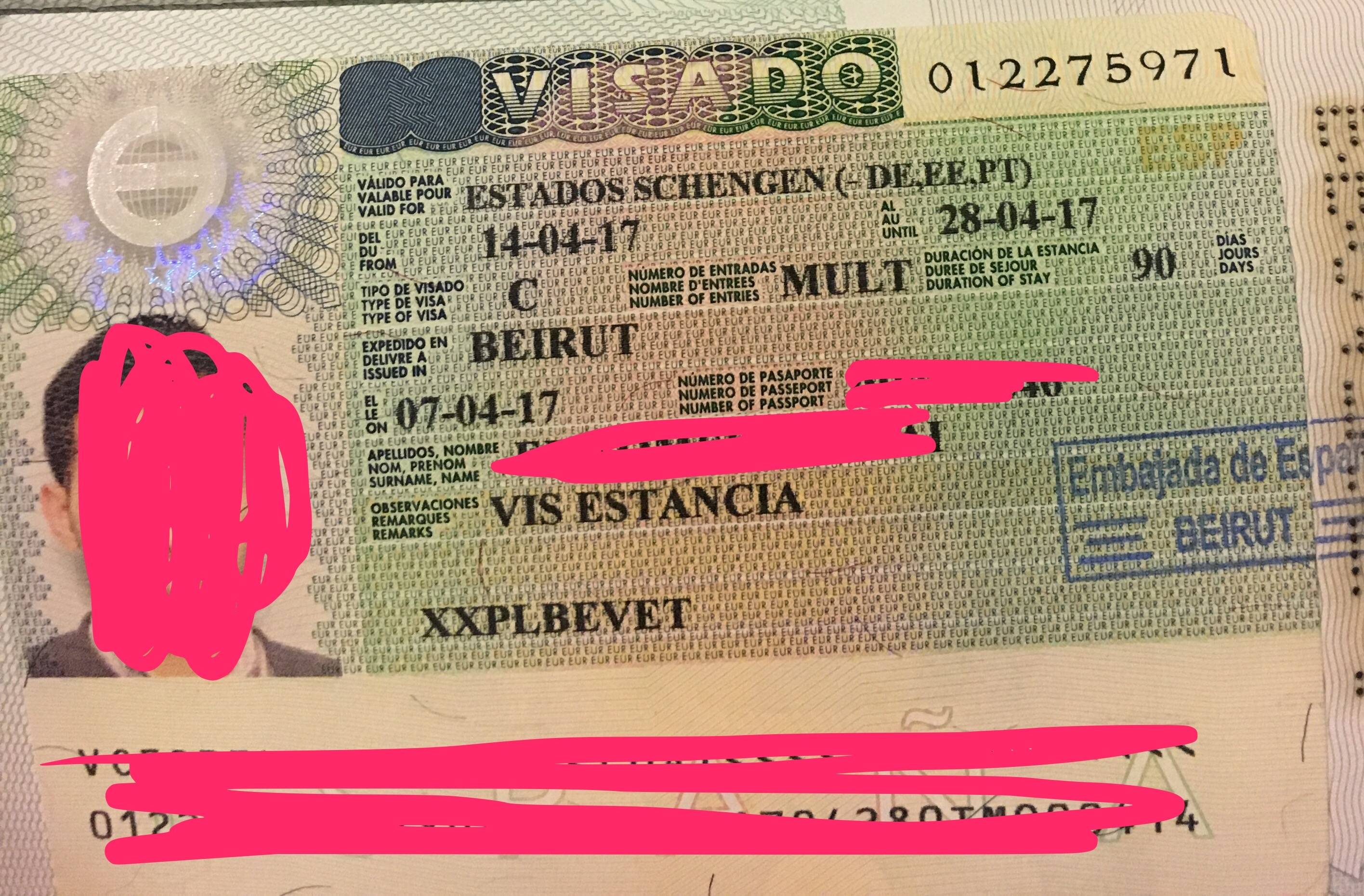 As counter-intuitive as it might seem to you, the German police's decision to deny entry makes sense. You were actually entering Germany, that's why you had to cross passport control in Frankfurt. Because of the way the Schengen area is organised, there is no sharp distinction between entering Germany and transiting to another Schengen country, tickets to Barcelona notwithstanding (transiting on a way to a non-Schengen destination like London is a completely different thing).

After you go through passport control at the first Schengen port of entry, there are no systematic border checks anymore. For example, in the last couple of weeks I went from the Netherlands to Portugal and from Belgium to Switzerland without showing my passport or ID to anyone (not even the airlines).

Because all this is legally sound, you are extremely unlikely to receive compensation from anyone. You could contact the Spanish embassy to enquire about this “-DE” but even getting an explanation might be difficult.

What you found in your passport is a cancelled entry stamp, which is standard procedure when refusing entry. “C” corresponds to the reason for refusing entry, namely “No valid visa or residence permit” (as your visa does not cover Germany).

Regarding future travels to Europe, it seems that your visa is still valid. It is entirely possible for the police to deny entry without cancelling a visa. But they can also cancel visas if they have a reason to. The fact they didn't should therefore play in your favour when travelling to Europe again as this imply they saw no reason to believe you are not meeting the requirements for your visa, let alone that you obtained it fraudulently or present a danger to the Schengen area.

Border guards will however see you were refused entry and will presumably enquire about it or examine your situation more carefully than you might have been used to before these events.

Not the answer you're looking for? Browse other questions tagged visa germany schengen or ask your own question.

1
Waiting time when applying for a German passport abroad?
3
Does a “refused Schengen visa” application affect future Employment/Jobseeker visa applications?
1
What is the step by step procedure to obtain a ZAV certificate for Germany Schengen Visa?
4
Travel within EU with expired German Aufenthaltstitel (Residency Permit)
3
Apply for Schengen while waiting for Family Reunion visa (Germany)
1
Marriage with Schengen visa in Germany with German citizen
0
Requirements for German work visa