A non-American individual, waiting for an I-485 to be approved, has an EAD and works in the United States. His EAD expires on November 15. The individual filed for an EAD extension on September 15, and still hasn't received the I-797C Notice of Action for the EAD extension from the USCIS. The individual qualifies for the Limited 180-Day EAD Extension Rule (mirror).

On November 15, if the individual still hasn't received the I-797C Notice of Action, is he forbidden to work in the United States?

The individual is aware that he may contact the USCIS to inquiry about the non-delivery: https://egov.uscis.gov/e-request/displayNDNForm.do (mirror):

Did you miss a notice about your pending case with USCIS? While your case is pending, we may mail you notices such as a request for additional evidence or a decision notice. Our customers sometimes report to us that these notices are not received. Check your case status online to see whether we mailed you a notice. For selected forms, you can send us an inquiry if you did not receive a notice that we mailed you.

The I-9 doesn't seem to mention the Limited 180-Day EAD Extension Rule: 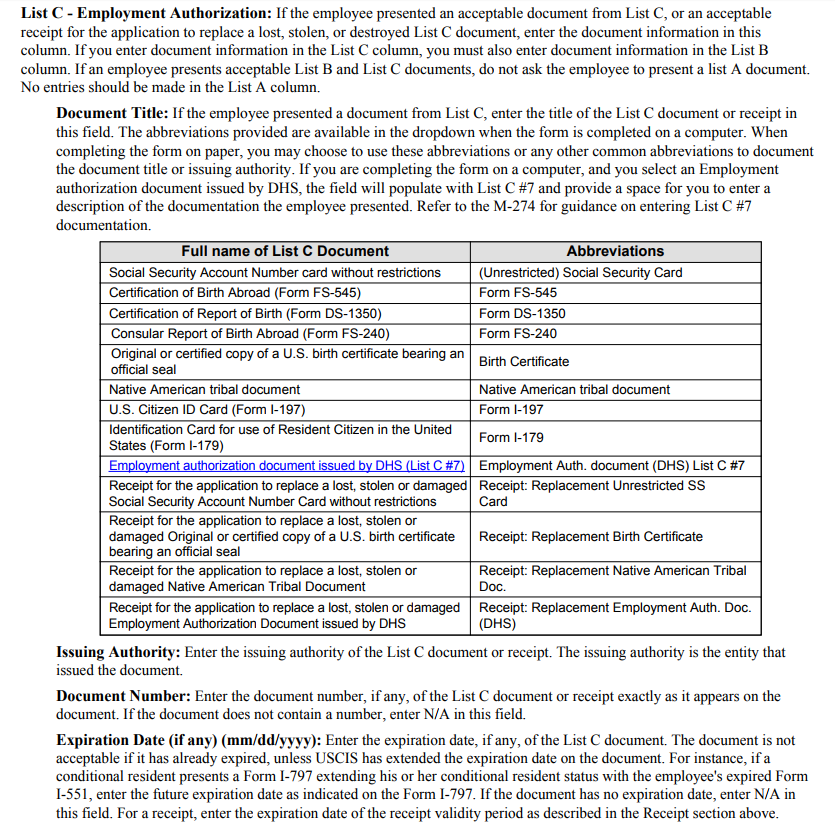 (see expiration date section. I have no idea why the USCIS has this tendency of disabling copying texts from their forms.)

Assuming his application actually got there (didn't get lost in the mail), and it hasn't been rejected without his knowledge, I believe it would be legal for him to work, but he doesn't have proof of it, so he won't be able to satisfy the I-9 requirements for any employer to hire him as an employee.

The regulation regarding automatic extension of EADs says the employment authorization is automatically extended as long as the renewal application is filed before the expiration date of the EAD.

(i) Properly filed as provided by form instructions before the expiration date shown on the face of the Employment Authorization Document, or during the filing period described in the applicable Federal Register notice regarding procedures for obtaining Temporary Protected Status-related EADs;

(ii) Based on the same employment authorization category as shown on the face of the expiring Employment Authorization Document or is for an individual approved for Temporary Protected Status whose EAD was issued pursuant to 8 CFR 274a.12(c)(19); and

(iii) Based on a class of aliens whose eligibility to apply for employment authorization continues notwithstanding expiration of the Employment Authorization Document and is based on an employment authorization category that does not require adjudication of an underlying application or petition before adjudication of the renewal application, including aliens described in 8 CFR 274a.12(a)(12) granted Temporary Protected Status and pending applicants for Temporary Protected Status who are issued an EAD under 8 CFR 274a.12(c)(19), as may be announced on the USCIS Web site.

However, for completing the I-9 as an employee, either as a new hire or for reverification since his previous employment authorization ended, he will not be able to satisfy the documentary requirements until he gets the receipt.

The chapter (Chapter 4.2) of the Handbook for Employers M-274 which talks about how to handle automatic extension of EADs says that expired EAD in combination with the I-797C receipt for the renewal application serves as a List A document for the I-9 documentary requirements. Without the receipt, he doesn't have the documents to satisfy this. In addition, the employer is required to verify certain information on the receipt in order to accept the automatic extension, which cannot be done if he doesn't have the receipt: 1) that the "received date" on the receipt is before the expiration date of the EAD, and 2) that the category on the receipt matches the category of the EAD.

Not the answer you're looking for? Browse other questions tagged usa working-visas or ask your own question.

2
How to read I-797c form (notice of action for H1B)
8
PPACA "no insurance" fee for American expats living abroad
1
Query regarding I-94
2
How soon can my future US employer secure a (H1-B?) work visa (for a UK resident)?
2
Re-entering the USA with EAD extension receipt and I-797B
3
I-130 approved (I-797 received): Why do we have to file I-824 (and do we)?
2
How to calculate 180 days for Green Cards holders for being abroad? Will departure and arrival days considered or not?
1
When does one become a permanent resident from the N-400 standpoint?
0
Why does Canada issue only Work Permit and not a Visa when you have applied for an extension of an old Work Permit from inside Canada?