What is your legal status as PhD researcher in Spain?

I have a question that I have not found any related source, and my question is mostly focused on these group of people: "People of origin from Ibero-American countries, Andorra, the Philippines, Equatorial Guinea or Portugal or Sephardic, who are pursuing a ** Ph.D.* in Spain."*

In many European countries, such as Poland (where I reside) or the Czech Republic (where a person I know resides) your studies as a master or doctoral student (not undergraduate) count as half of the residence time in these countries and in countries like The Netherlands, if you pursue a Ph.D. (strictly a Ph.D.), your years of residence are counted as full-time residing in that place.

Based on the previous examples, if you pursue a Ph.D. in Poland or Czechia for 4 years, it means: "You have lived 2 years and if you learned Polish (B1+) and worked for 3 years more, then you are eligible for the permanent residence card."

And in The Netherlands, if you pursued a 4 years Ph.D. (considered as regular work by their law), passed the integration test, worked 1 year more, and learned Dutch (B1+), you are eligible to apply for the permanent residence card.

Now, my question is:

What is the situation in Spain? Does the doctoral student's time count towards your citizenship?

Because I read that in certain articles the following (translated):

"In the case of nationals of origin of Ibero-American countries, Andorra, the Philippines, Equatorial Guinea or Portugal or Sephardim, they may apply for Spanish nationality at the time of serving two years of legal and continued residence in Spain, and immediately prior to the request."

The time as a "doctoral student" is not something clear in most cases and less their legal status (in The Netherlands you get a researcher's visa, not a student's one, for instance). I only found that in Spain if you're a regular student (not a Ph.D. one) your time is not counted.

And it's perfectly reasonable, since generally when you're a regular student either you have a scholarship or you're paying your studies; technically, you tend to be exempt from paying taxes and you get some benefits and as a Ph.D. researcher, you often pay taxes as a regular worker. And this point of paying taxes is where a key difference comes into play between a regular student and a Ph.D. researcher since taxes are used, for retirement or social benefits like health or social care.

Also, as a Ph.D. researcher, you might need to teach a certain amount of hours per semester, work on your research full-time, write and present scientific papers, support other professors, and rarely, you will receive some classes since you're becoming an expert in one specific area of the science.

Most of the time, a Ph.D. researcher could be seen as a regular work because you have certain responsibilities, pay taxes, get a salary, and most importantly you're creating a unique solution to a problem with more or less clear goals and expected outcomes in a defined period of time (in the corporate world, a project) for a company, government, the university or an organization. An example could be the following one: "To design an algorithm for the detection of breast cancer with Machine Learning in Python."

For all previous reasons, in most European countries, a "doctoral student" is considered as a researcher inside the universities and the concept of scholarships tend to be uncommon (Canada, the US, Australia, etc. Cannot be taken as the general rule) because even in Marie Curie, which provides many of the EU "Ph.D. scholarships", for instance, they are considered as jobs, not scholarships as you can see in the image below. 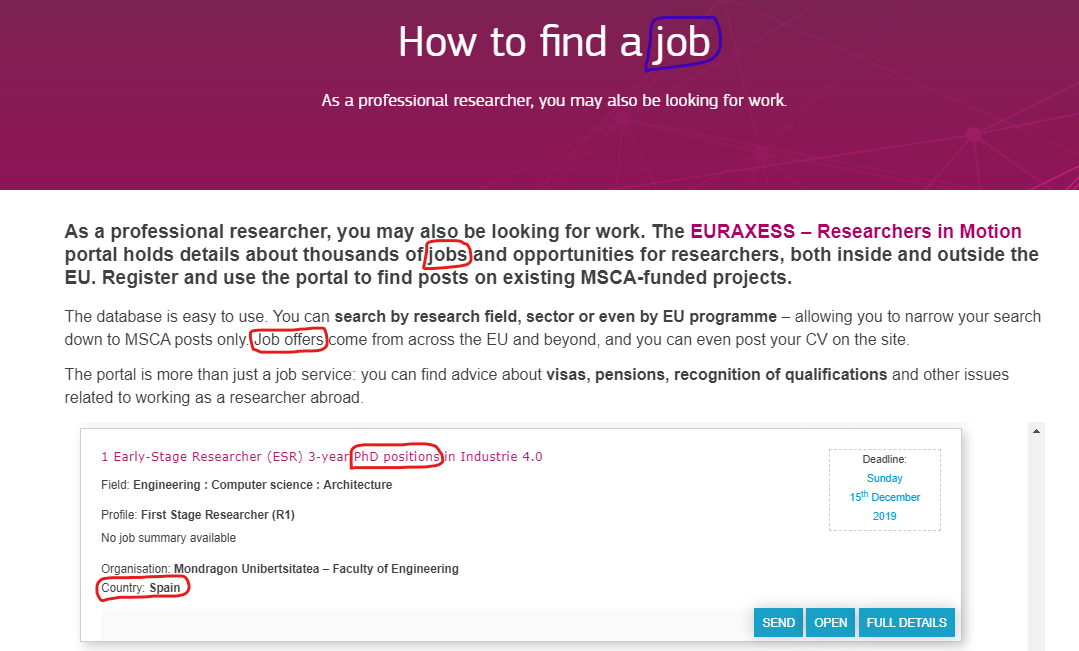 Therefore, have any of you have heard about it?

The confusion comes that most non-EU students are doing PhDs on student residence permits, but this is not always the case, because other residence permits (like a worker's) allow you to study. It always depends on the kind of residence permit, not the actual activities you do in the country.

For the positions you show in EURAXESS, generally speaking EU funded positions (specially Marie Curie Actions) require the grantee institution to use their financial contribution only to fund work contracts, and not scholarships. This is a hard requirement by the European Commission, and generally speaking you get a work contract and also can do a PhD, if you want (not strictly required).

This latter point means that the institution will issue you a work contract, and that requires a work visa, for which your time will count for permanent residence.

Not the answer you're looking for? Browse other questions tagged immigration eu citizenship spain job-hunting or ask your own question.

10
Can a non-EU citizen with a EU partner live and work in the EU?
2
Which visa for about a year in Spain with flexibility for Schengen?
1
Which EU countries have a well defined process of obtaining a visa + residence permit on the basis of income from remote job for non-EU citizen?
9
Dutch citizenship by naturalization regulations
2
ACS Australia Skill Assessment: does relevant work experience during bachelor studies count?
1
Transfer from F1 to H1B without OPT, H1B got approved
1
How can I obtain a Blue Card in Spain?
6
Status in Spain while holding a German residence permit