Is there an elaborate resource in inter-EU difference in traffic rules?

When relocating in the EU, you need to renew your driving license in your country of residence. This is often a simple procedure where you pay the fees and exchange your old license for a new license.

I am currently holding a Belgian license, but I did my driving exam in the Netherlands. Still there are quite some differences in traffic regulations. One would expect that some one having a national license, is familiar with the local laws. Yet I am driving in Belgium and it took me some time to learn the often very slight differences. Regulations regarding fog lights are a nice example. In Holland you are suppose to use your fog lights, when the you have less then 50m sight, whereas in Belgium that is with 100m and with heavy rain. I can list a dozen of these small differences I noticed over time.

Local car association often issue brochures indicating the difference, but as I have learned these brochures are often extremely incomplete.

So when you relocate to a new country, where you simply exchange your driving license for a local one, is there an extensive EU-wide resource one could consult for an elaborate comparison? One could of course read the local road code, but I believe a comparison would be a better resource.

The majority of the laws and signs will be very similar on mainland Europe, as the traffic laws were somewhat standardized in the last century. That said there might be slight differences. There are a few pages where you can check some of the differences:

Also when entering the country you usually face a sign showing the major speed limits and some other laws (like whether you need to turn on your headlights all the time or not) using pictograms: 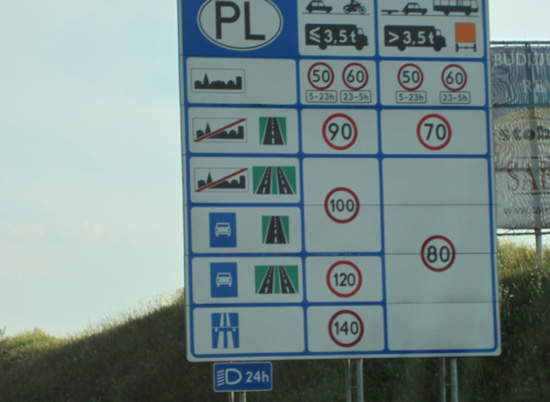 Also note that in the UK and Ireland you have to drive on the left, and in UK the speed limits are shown in m/h and not km/h. Warning signs in Ireland are mostly different than in other European country.

If you do want to settle in an other country, then the best you can do is read the laws (or at least the book you would read when preparing for your driving test), to make sure you understand everything correctly, as there might still be subtle, but important gaps. For example in the UK there is no such thing as a crossing where each of the roads have the same priority. There is either a marked give way sign, or the crossing is marked as a (mini) roundabout, where roundabout laws exist (e.g. you have to give priority to the right). If you arrive at a crossing and you don't have the marked line or the give way sign, and it's not a roundabout, you can assume that you have the priority. On the other hand in mainland europe unmarked crossings without give way signs have the same priority, meaning that if you think you have the priority (as in UK you would have) you can get into serious accidents.

Not the answer you're looking for? Browse other questions tagged eu driving-license regulations or ask your own question.

The Overflow Blog
Featured on Meta

19
How to renew a US driver's license when living abroad
6
How long can you live+drive in France before you have to change your EU driving license?
6
How to drive legally while visiting in the US as an expat US citizen with no US state license
2
What happens if you drive in British Columbia on a foreign license for more than 3 months?
2
Does an international driving license still work in Germany after 6 months of residence?
0
Exchanging UK License for German License (but with a twist)
0
Will the transition from a non-exchangeable licence to a full UK one make car insurance premium skyrocket?