My wife applied for EEA family permit for coming to join me in UK.

She is from India and I also lived in India before coming to UK. I acquired my Portuguese nationality and then came to UK in July 2015.

We provided every evidence to support her application except the conversation medium which we used after I arrived in UK.

This is what the refusal letter says : 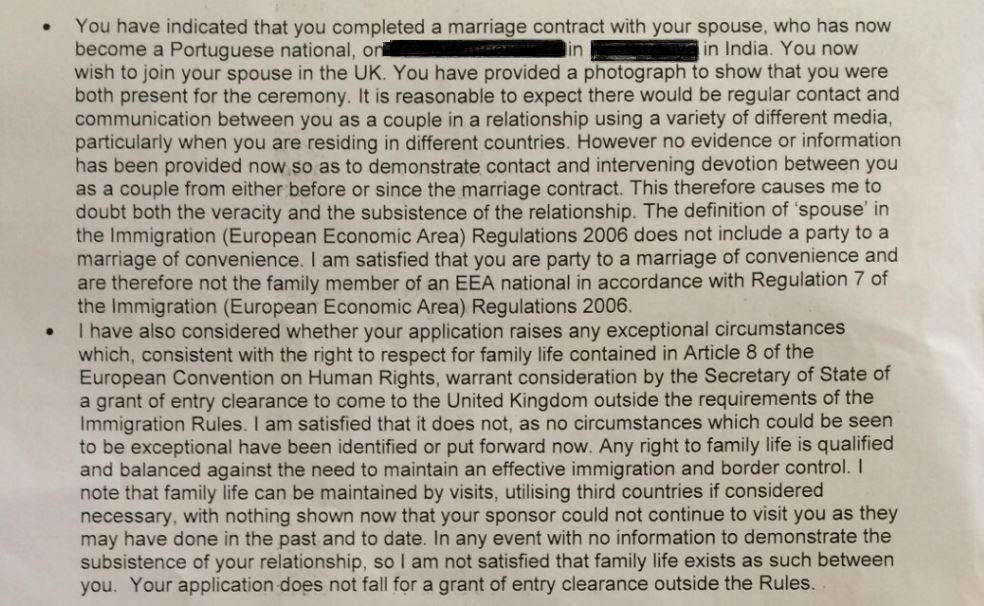 Now for reason 1 I understand that we did not provide sufficient evidence, so next time I am going to put every thing from our chat history in Skype, Whatsapp, Viber and phone logs.

But I do not understand how to justify or provide evidence for the second reason.

Can someone please advice?

Also, we got the refusal last week and I am thinking to reapply in next instead of going for appeal as this takes much more time to process. Do you know if there any specific time limit under which I cannot make a new visa application if I am already refused visa.

I would be inclined to appeal, though I say that without enough awareness of the associated costs, so I can't actually recommend one way or the other whether you should appeal or reapply.

The refusal strikes me as scandalous. Consider the guidance for evaluating your application under which the entry clearance operator was working (emphasis added):

EUN2.10 What if I suspect a marriage / civil partnership of convenience?

The definition of ‘spouse’ and ‘civil partner’ in the EEA Regulations does not include someone who has entered into a marriage / civil partnership of convenience.

When a marriage / civil partnership of convenience is suspected, the burden of proof is high and rests with the ECO. However, in these cases the ECO is entitled to interview the applicant. Factors to consider include:

The ECO should not consider the following cases as marriages / civil partnerships of convenience where:

The fact that your application came a few months after your marriage is, I suppose, sufficient to invoke the third "factor to consider," but the ECO should have made some effort to develop evidence to satisfy his or her burden of proof, and did not.

Have the two of you ever lived together? If so, and if either you reapply or your appeal raises the question of additional evidence, I would skip the chat histories and phone logs, and instead rely on the last bullet point, which should be much easier and quicker to show. In addition, it will be a more reliable defense against any suggestion that yours is a marriage of convenience.

For an EU perspective on the question, see https://eumovement.wordpress.com/2014/10/16/eu-free-movement-handbook-on-alleged-marriages-of-convenience/. A selection (emphasis removed):

Burden of proof is on the national authorities to prove abuse

Married couples cannot be obliged or required, as a rule, to present evidence that their marriage is not abusive.

This reflects the principle of law that the person who lays charges has to prove the charges (‘semper necessitas probandi incumbit ei qui agit‘).

The burden of proof clearly rests on the national authorities who suspect that a non-EU national has entered into a marriage of convenience with an EU citizen for the sole purpose of being granted an EU right to free movement to prove that the marriage is of convenience.

Here is a story of a successful appeal, in which the court awarded the cost of the appeal to the appellant: http://www.immigrationboards.com/eea-route-applications/won-vs-marriage-of-convenience-details-inside-now-t124572.html. A selection:

Today i got Letter from HM court and Tribunal

They decided in my favor and gave my 80 Euro back

If you read down a bit, you can see the (very poorly scanned) text of the appeal decision. That makes it clear that the ECO has a burden to prove a reasonable suspicion that the marriage is one of convenience, at which point the burden shifts to the visa application to prove that it is not. I do not know whether the amount of time between your marriage and the application is sufficient evidence of reasonable suspicion.

We reapplied for EEA Family permit and my wife got the visa this time in 20 days approximately.

I followed the guidelines from above answers by @gnasher729 and @phoog.

I reapplied for my wife using our previous documents and this time I submitted more documents to prove our communication.

I took screenshots from my mobile phone from applications that we used to communicate with (e.g. whatsapp, skype, viber, etc.) showing different dates in such a way that I had 2 screenshots from each calendar month since our marriage.

We also provided phone call logs from my mobile phone operator since my arrival in UK and highlighted my wife's number, call date and duration with a highlighter pen.

We also added train tickets that we used during our journeys while in India.

An appeal only helps if a mistake was being made in the decision. For example, if they said "we have no evidence for X" when you actually gave them evidence for X, but they lost it. That doesn't seem to be the case here, so an appeal would be useless. Much more promising to supply evidence of contact, like email history, skype history, huge phone bill, and so on, and to apply again with the added evidence.

You can apply as often as you like. They told you that you left out evidence that they wanted to see, so you apply again with that evidence added. Then they might find something else that's wrong, so you correct that and try again. A rejected application isn't held against you.

Not the answer you're looking for? Browse other questions tagged united-kingdom visa eu refusal or ask your own question.

9
UK EEA Family Permit Refused - Urgent HELP needed - Marriage of convenience
6
How can my non-EU citizen wife settle with me in the UK?