Stack Overflow for Teams is moving to its own domain! When the migration is complete, you will access your Teams at stackoverflowteams.com, and they will no longer appear in the left sidebar on stackoverflow.com.

Check your email for updates.

Carte de séjour in France if I already have a long-stay visa--what's the point?

According to OFII and other resources I've run across, I'm required after entering France to apply for a carte de séjour as well. This isn't a question about how to do that--I've already begun the process. I'm just wondering what it does for me or why it's required. As I understand it, a titre de séjour in general is any document that gives me the right to live and work in France, and my long-stay visa (for research) already serves that purpose.

My long-stay visa is valid for a year, but should be possible to renew. However, I am planning on staying in France for longer than a year (indefinitely even). If I have a carte de séjour will I also need to renew my visa, or will it take the place of my visa as my official permit to live and work in France (I understand I will still need to renew my carte de séjour as well, but if I need a visa in addition to it what even is the point??)

Update: This update is a little off-topic from my original question, but I wanted to add a brief update on my visit to the OFII office for my visa de long séjour dispensant de titre de séjour (known as "VLS/TS"), since it might be helpful/interesting to anyone who runs across this. My nearest OFII office is in Créteil, so your mileage may vary at different offices. I was given an appointment to be there at 1:00 P.M. sharp, but upon arriving there was already a long line at the door, and the office itself did not open until 1:00. After the doors opened they started letting people near the front in one at a time, but there was a huge crunch around the door and the line became more of a morass. I was toward the back and couldn't really understand what was going on, nor hear what the sole OFII employee standing at the door was saying.

Eventually, about half an hour later, I was close enough to hear to him call out if anyone had a rendez-vous. I shouted that I did and waved my appointment paper around. He waved me over and I had to literally shove my way through the crowd to get up to the door (some people helped by pushing me from behind). The man let me through, and sent me right up to the front desk. They looked at my paper and had the gall to ask me why I was late. I told them, in my limited French, that I was there since 12:50 and was just in the back of the line and was trying to be polite. It was not clear that because I had a written appointment I could skip the line (for all I knew all those people had appointments too).

But they honored my appointment, and though I had to wait a little longer everything else went smoothly, and all the staff on the second floor were very friendly and helpful. I did not have to have a medical checkup. I'm not sure why not--maybe a privilege of being an American--they reviewed my paperwork which was all correct, and put the sticker in my passport.

The sticker is largely redundant with the VLS, but as others have pointed out the VLS is relatively new, so the procedures may not be fully sync'd up yet. It is also slightly different insofar as it has my permanent address in France on it, as well as a personal registration number particular to OFII, which I assume will be used to track my future applications. They told me that when my VLS expires I can get this renewed in the form of a proper carte de séjour. For anyone curious, the sticker looks like this: 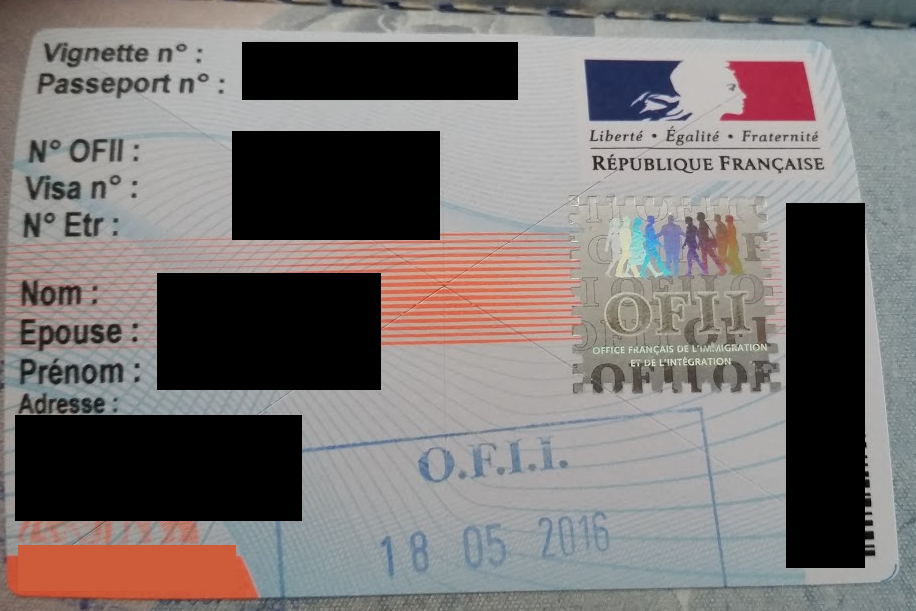 They just pasted it on the page of my passport after the page my visa is on (kind of a waste of a page IMO but oh well).

I don't have a full answer for you, or a full understanding of the situation, but here are a few useful bits of information based on personal experience.

I am not sure whether it is absolutely impossible to renew the visa but that's not the way it's usually done. The regular process is: long-stay visa to enter then carte de séjour that you renew every year until you get either citizenship (if you want that, obviously) or some way to qualify for a carte de résident or at least a carte de séjour with a longer validity.

Once you have a French carte de séjour, you won't need any visa to enter either France or the rest of the Schengen area. The idea is definitely not to hold both the carte de séjour and the visa indefinitely.

Also, originally many long-stay visas had a shorter validity, it's only recently that the "visa long séjour valant titre de séjour" was created, thus eshewing the need to get a carte de séjour for the first year and creating this somewhat unusual situation. But the system was designed around the carte de séjour and you are still expected to get one eventually.

According to the OFII website, the part that makes this whole process logical is explained by this:

"The completion of all the formalities with OFII is attested by the insertion of a sticker in your passport. It is this validation which transforms your visa into a residence permit (titre de séjour)"

The whole process seems illogical because of the false assumption that you (and many anglophones including me) made in your first paragraph: that the visa is a titre de séjour: it is not. This was explained to me by the embassy in my country of origin; after three months in France, no matter what the expiry date on my visa, if I didn't have an OFII sticker by then, the visa would cease to allow me to stay in France.

Not the answer you're looking for? Browse other questions tagged or ask your own question.

4
What does one need to apply for a titre (carte?) de séjour in France?
1
Does a carte de séjour extend your visa?
1
How long can I stay in France after my titre de séjour and récépissé have ended
1
I missed my medical visit for my carte de sejour in france due to COVID-19. Can I still re-enter the country on my work visa?
2
France: involuntarily terminated, what happens to carte de séjour