Refused twice for UK visa, second time under 320(7A) (deception)

I am in dire need to get my UK visa, tier 5, temporary visa for sports. I am a US citizen applying for a UK visa. I am a recent college student and unfortunately left my job thinking this process would not be this difficult. I reside in the United States.

Based on my 2nd application, I need help to understand, If I resubmit my visa will they automatically refuse? There is usage of language that says "may be refused under 320(7b)" and "ATTRACTS" an automatic ban up to 10 years. This does not say directly, I am banned. How do I clarify?

VISA APPLICATION #1 My first application was denied because the I was provided with a Certificate of Sponsorship that was not the correct document. I had no way to validate this.
- I submitted a Visa administrative review to advise them and provided a letter from the agency to document the error. They also provided me with the COS reference number. My first application was still denied and I had to resubmit.

VISA APPLICATION #2 (EXPEDITED) I submitted the 2nd visa application and attached the required documents. There is one questions that is included with the "criminal, broke law" section that asked if I had been refused for any visas, including UK? I made a mistake and said no. I have been in constant contact with UK support by email and paid phone previously and in no way was I trying to be deceptive. My 2nd visa was rejected with the attached statement. SEE IMAGE FOR REJECTION REASON

I need help to understand, If I resubmit my visa will they automatically refuse? There is usage of language that says "ATTRACTS" an automatic ban up to 10 years. 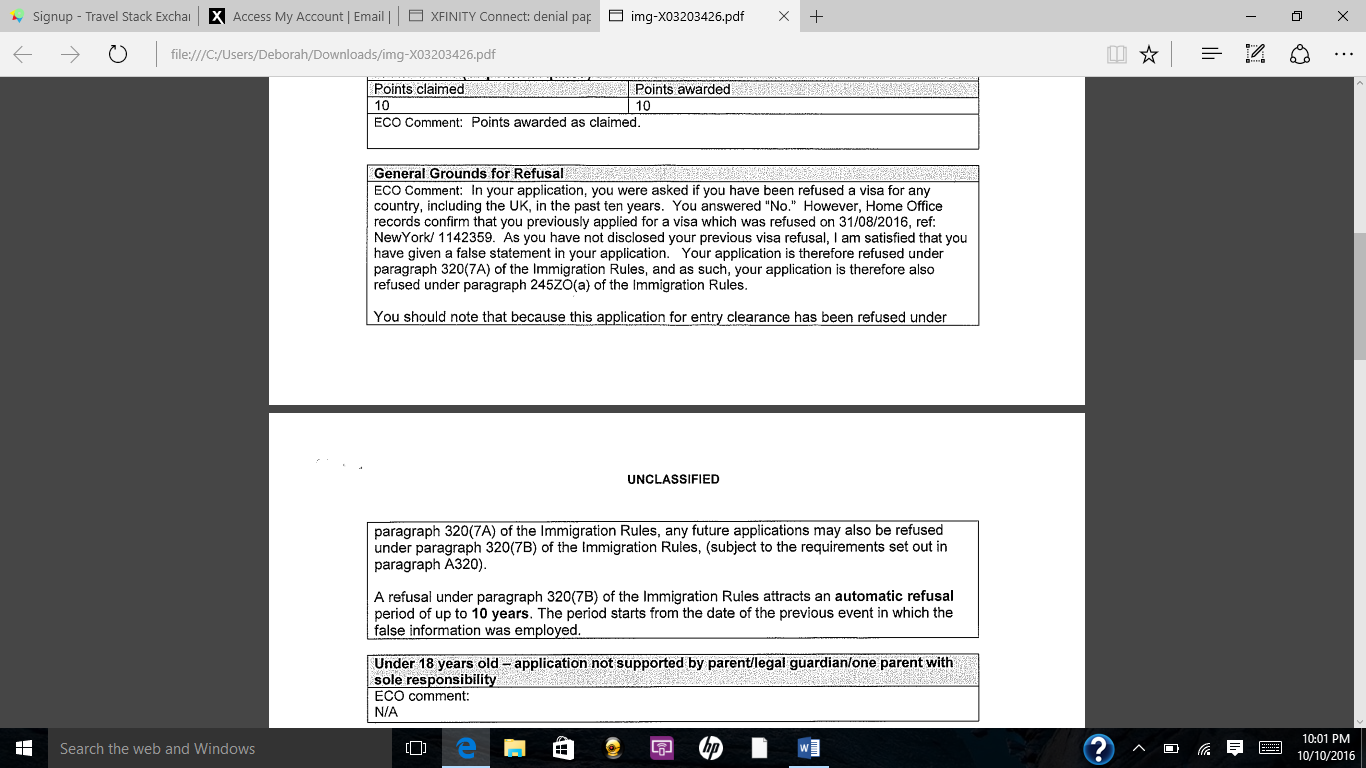 Awkward history for this question. It was posted in Travel (where it is most topical) and then reviewed for a being a duplicate. It's not a duplicate IMHO because there was a previous refusal. Then moved to Expats by an inept moderator (without submission to the review queue), thus separating it from all of the related questions involving Paragraph 320 (7A). The OP does not have an account on Expats and neither do some of those who made valuable comments.

Having said all of that, the type of visa (a T5 in this case) is almost totally irrelevant. All visa applications are subject to refusal where evidence of deception is found. The comments above contain a nice analysis of the situation, and just to recap...

You got refused under Paragraph 320 (7A) for deception. You do not have a ban currently in effect. When somebody gets a refusal like this, they reserve the right to use Paragraph 320 (7B) the next time the person applies. That paragraph imposes a 10 year ban.

You also got refused under Paragraph 245ZO(a), which is something of a tautology in this case. It's not relevant at the moment.

I have been in constant contact with UK support by email and paid phone previously and in no way was I trying to be deceptive.

Phone calls and emails are a waste of time. Everybody in the world says it was a mistake, a clerical error, a misunderstanding, and what-have-you when they get caught in deception. I had an American once who (foolishly and against my advice) got their US Senator to write them a letter, they don't care. You cannot get them to reverse a decision with phone calls and emails, it's against the law for them to do that. Plus you are dealing with crown servants who do not trust you, what do you expect to accomplish?

If I resubmit my visa will they automatically refuse?

No, they will not 'automatically refuse' Your next application will take place under a Sword of Damocles (if you'll forgive the metaphor) because it may result in a 10 year ban. It would be unacceptably adventurous to attempt such an application solo and the standard remedy is to instruct an acknowledged specialist in failed Tier 5 applications like (Pat Saini or etc) to represent you. And yes, as comments have suggested, it will be bloody expensive. Breathtakingly so.

This basketball season is water over the dam; get a solicitor and try for next year. You would have been aware that you had a previous refusal because you were making a second application, right? You even pursued an Administrative Review and that would strengthen your memory of having a previous refusal. Lots of people have problems with their COS on their first application, it's very common; the vast majority fix it with a fresh application. It didn't work for you because they got you on something else and now matters are worse.

You didn't get a ban, but if you do, we have an answer for how to get it lifted at: https://travel.stackexchange.com/questions/64097/what-can-i-do-to-lift-a-10-year-ban-for-making-a-mistake-in-my-uk-visa-applicati. There is also a great work-around if you were under 18 at the time of the offence.