I'm married to an EEA national, a Romanian. We've been together for 3 years and 8 months (44 months), and have been married a year ago, on the 11th Nov 2015. My wife has visited me twice in my country, Algeria.

I applied to the UK for an EEA Family Permit on 19th Oct 2016, and provided a full file to show that we have a genuine marriage. I was aware that the supporting documents are crucial, and included photographs of my wife pictured with my parents, brothers and cousins.

I keep in touch with my wife daily, but didn't know how to attach that sort of evidence to the visa application (download and print, download FB and Skype coversations onto USB flash?). I went ahead and applied without any proof of our communication. I got a refusal and both my wife and I are devastated.

The refusal says that I have the right to appeal within 28 days, I'm requesting another appointment and re-applying.

How do I show the proof of our constant communication? 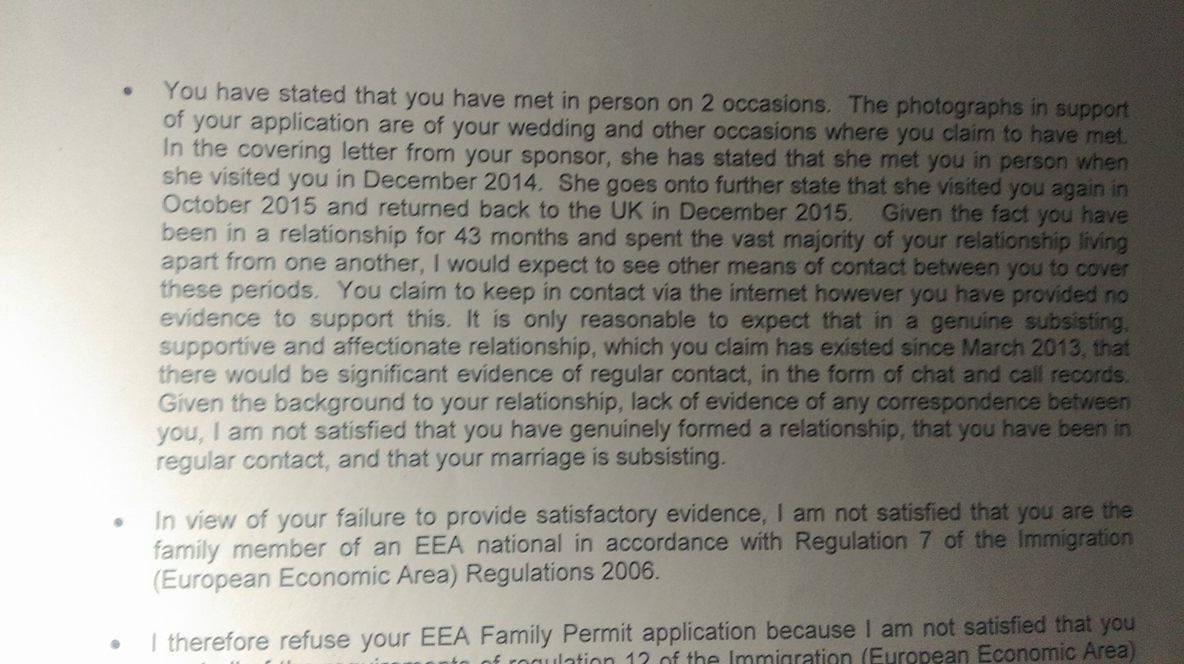 This looks a little fishy. According to EUN02:

When a marriage / civil partnership of convenience is suspected, the burden of proof is high and rests with the ECO.

They have use the refusal formula that corresponds with inadequate evidence to support your claim of relationship, but you have submitted the marriage certificate, which should by itself be sufficient evidence unless they suspect a marriage of convenience.

I suspect, though, that given your lack of cohabitation, they would probably persist with their suspicion. In other words, they would hold that the ECO had met the high burden of proof to suspect a marriage of convenience. This would mean that it would still fall to you to show evidence rebutting their suspicion. To put it another way, they probably used the wrong formula, but it's not clear that they have come to the wrong conclusion.

The formula they should have used is:

In saying this, I'm giving them the benefit of the doubt that your circumstances trigger the third or fourth factors below:

Factors to consider include:

So your quickest route to acceptance is probably to reapply, including your Facebook and Skype records. You may also want to write to the Entry Clearance Manager, though, and ask why you were rejected when

There is a chance that an informal appeal to the ECM would be faster than a new application (and, if successful, it will certainly save you the trouble of having to compile all that evidence). You can pursue both strategies concurrently, or try them one at a time, as you prefer.

Not the answer you're looking for? Browse other questions tagged family uk-visa refusal or ask your own question.